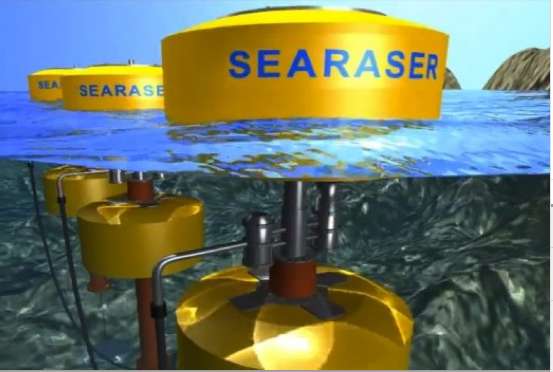 Jordy E — January 31, 2012 — Eco
References: guardian
Share on Facebook Share on Twitter Share on LinkedIn Share on Pinterest
The environmentally savvy energy company Ecotricity has taken on an underwater bicycle pump as one of its latest projects. Technically referred to as the 'Searaser' device, this aquatic machine has been praised for pumping saltwater to an onshore generator during a prototype test.

By pressurizing water through the power of tides and waves, Ecotricity hopes to capitalize on a renewable energy market that is particularly relevant to the UK. Although the engineering challenges are great given the difficulties presented by mixing water and electricity, the potential reduction of coal and gas emissions has been recognized.

Alvin Smith, the inventor of Searaser, claims that he thought of the idea while he was playing in his swimming pool with a ball. Smith noticed that every time the ball would reach the surface of the pool, energy was being emitted.

While this eco-friendly venture holds a lot of promise, similar devices such as the 'Pelamis' have encountered several roadblocks. Nonetheless, Ecotricity has remained faithful to their vision and plans to install 200 Searaser's around the UK within the next five years. If this proposal does come to fruition in the near future, around 236,000 homes could be supplied with renewable electricity.
1.2
Score
Popularity
Activity
Freshness
View Innovation Webinars