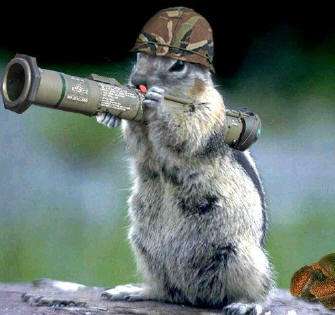 We've mentioned before that the Eastern Gray Squirrel from North America has invaded Western Europe, threatening the European Red Squirrel. They've come up with a number of solutions, but the latest involves capturing them and frying them up as a substitute for more traditional meat dishes.

"A grey squirrel," the Guardian notes, "It tastes sweet, like a cross between lamb and duck. And it's selling as fast as butchers can get it."

Apparently it's selling like hot cakes, with game butchers unable to keep them in stock. I can see it... hunters bring a shipment in, and they don't even have time to freeze fully before they're scooped up!

In North America, most people are still against hunting wild animals... people have their varying opinions, and are entitled to them, but I'll just say my European roots are evidently reflected in my point of view.