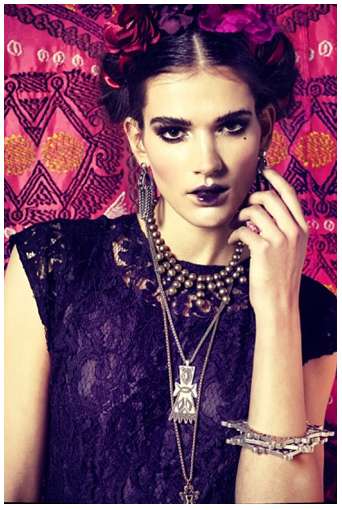 Meghan Young — August 8, 2012 — Fashion
References: dudinenyc & refinery29
Share on Facebook Share on Twitter Share on LinkedIn Share on Pinterest
Inspired by her travels, jewelry designer Jennifer Kramer creates accessories that not only pay tribute to her latest destination of choice, but also incorporate her own bohemian and rock n’ roll style; the most recent being the Dudine Mexican Vagabond collection. Biker chic with a Spanish flair, rocking this style will make you the girl no one wants to mess with. This is an especially good quality when the wearer travels to another country herself.

Created in New York City, the Dudine Mexican Vagabond collection is comprised of statement necklaces, bracelets and rings that are not too overwhelming on their own, allowing the wearer to layer and stack as desired. On a charitable note, 10 per cent of the proceeds from the Dudine Mexican Vagabond collection will be donated to Thousand Smiles Foundation.
4.6
Score
Popularity
Activity
Freshness
View Innovation Webinars