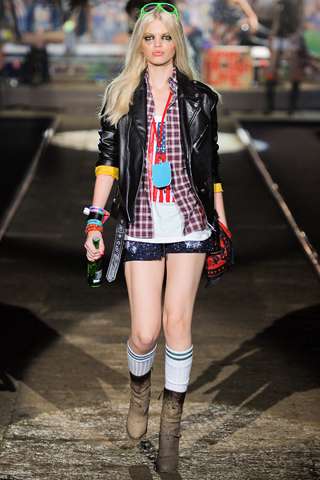 Souzan Michael — September 26, 2011 — Fashion
References: nowfashion & style
Share on Facebook Share on Twitter Share on LinkedIn Share on Pinterest
The Dsquared2 Spring 2012 collection is, in my opinion, in the running for the most intriguing and memorable show of Milan Fashion Week this season. Never ones to be outdone or upstaged, twin designer duo Dan and Dean Caten presented a collection of grunge-inspired looks that mixed all American touches like stars and stripes.

The result of the Dsquared2 Spring 2012 collection is something that is seemingly chaotic at first glance, but upon taking a second look (and third and fourth, if you're like me), it becomes clear that the Caten brothers are in complete control of their craft and never miss a step.

Plaid was mixed with stars and stripes, which made an appearance alongside flat riding boots and denim, for a collection that screamed cowgirl chic. The Dsquared2 Spring 2012 show also featured many of the models walking down the runway in "morning after" smudged make up while carrying a model of beer.

The theme was all American glamor meets grunge -- after all, "When in Rome" -- or Milan, in this case.
5.6
Score
Popularity
Activity
Freshness
Get Better and Faster