Top 60 Furniture Trends in November
Next
Set of
Related
Ideas 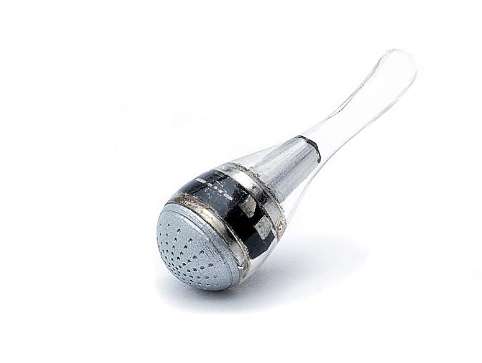 Bianca — February 29, 2008 — Tech
References: moma.org & moma.org
Share on Facebook Share on Twitter Share on LinkedIn Share on Pinterest
Poised with the question of what a "drop of music" would look like in 3D, German designer Noa Lerner came up with the Music Drop concept. The tiny ear piece, shaped like a droplet of fluid, contains a piece of music of can only be listened to once; "one drop of music that contains one song that can be used only one time."

It was developed by the Berlin University of Arts for a multi-disciplinary research project in 2007. The Music Drop will be displayed as part of the Design and Elastic Mind exhibit at the Museum of Modern Art in New York from February 24 to May 12, 2008.

It's a really neat idea, especially with some much music being pirated these days. A self-destructing song is a great idea, but there is no information on how to reload, or if refilling the droplet is even possible. The design concept is great though, and I would love to learn more about the idea.