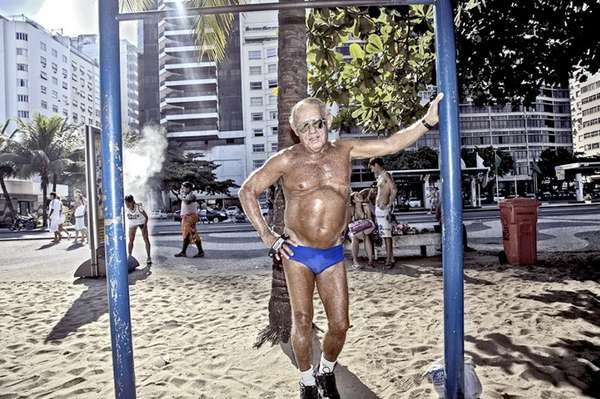 Dougie Wallace Shoots the Wacky and Wonky on UK Roads

Dougie Wallace's website describes him as a "documentary photographer," and the snaps included in this collection of his street photography only serves to strengthen the claim. His street style shots eschew the conventions associated with the burgeoning field of candid street photography. Instead of taking pictures of well-coiffed and elegantly dressed streetwalkers, Dougie Wallace shoots subjects that are notable for their ridiculousness.

Some highlights of Dougie Wallace's street flicks include a shot of a well-oiled, slightly overweight, middle-aged man clad only in a blue speedo and 1970s aviator frames. The image, like most of Dougie Wallace's, is hard to turn away from and leaves the viewer with conflicting feelings of humor, intrigue, and confusion.

Up next for Dougie Wallace: A solo exhibition entitled 'When I Grow Rich Say the Bells of Shoreditch,' which runs at the CAMP, as a part of the London Street Photography Festival from July 7th-July 17th, 2011.
6.4
Score
Popularity
Activity
Freshness
Get Better and Faster