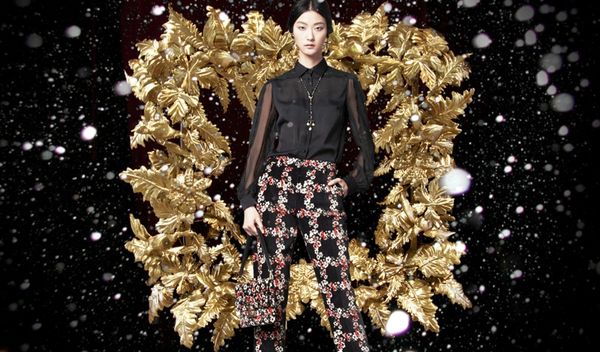 Meghan Young — December 4, 2013 — Fashion
References: swide & fashiongonerogue
The Dolce & Gabbana Holiday 2013 ad campaign is festive in a darkly luxurious way. While the looks featured throughout appear more appropriate for a work function than a holiday party, there is a winter vibe about them that lends them a bit of cheer. It helps that the models are captured against a large golden wreath with what looks like snow falling around them.

Starring Marine Deleeuw and Ji Hye, the Dolce & Gabbana Holiday 2013 ad campaign features elegant ladylike fashion that revolves around lace, velvet, chiffon and tweed. Appearing on the Italian fashion brand's lifestyle site, Swide, the campaign caters to those women who want to celebrate the holidays but in an unexpected way. No matter what the occasion, the outfits are glamorous.
5.9
Score
Popularity
Activity
Freshness