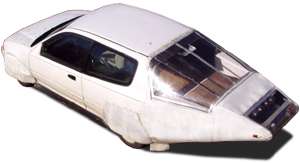 The Modified ‘Aero' Civic Gets 95 MPG

Michael Plishka — February 2, 2009 — Autos
References: aerocivic
Auto companies have a tendency to make grandiose overtures when their designs improve mileage by 5 or 10 mpg. They speak of the problems encountered in improving technology, how things just can’t be done without radical changes and an increase in cost.

Well, Mike Turner took $400, some elbow grease and a 1992 Honda Civic and and modified the aerodynamic drag (the friction between the air and the car).  The result is a car that slips through the air, averaging 95 mpg at 65 miles per hour.

Its resistance to the air is below that of the Toyota Prius! This car is so slick, bugs, road splatter and even deer fly over the car without splattering the windshield.

German cars of the 1930’s, in particular a 1939 Maybach that has very similar lines to his Civic.

While we could say auto companies have some explaining to do, perhaps they just need to start engineering…
2.3
Score
Popularity
Activity
Freshness

Versatile Avant-Garde Purses
The Zola Purse Can be Worn as a Clutch, Crossbody or Shoulder Purse