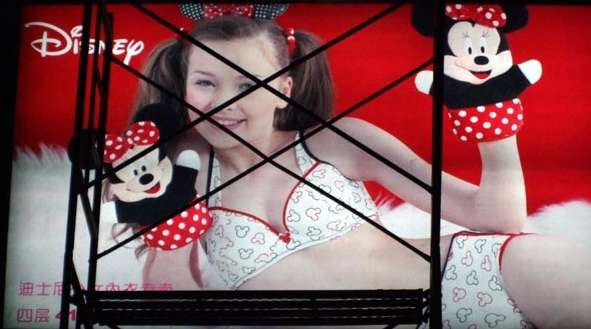 The billboard shows a girl that looks about 10 or 11 years old in skimpy underwear playing with Minnie Mouse hand puppets. While not explicitly sexual, the ad on busy Xinjiekou Nandajie Avenue sends a negative message to little girls. The presence of the Disney logo on the upper left corner of the billboard ensures this is an official billboard.

"It has caught us totally by surprise," Gary Foster, a spokesman for Disney's consumer-products division claims. "We have literally hundreds of licensees making our products. They are supposed to submit any kind of imagery to us before it is used, but it's hard to enforce that sometimes."

Trend Hunter recently featured a controversial Hanes underwear campaign that was later disowned by the company. Hanes claimed it did not approve the ads which were created by one of its licensed partners in India. I think brands should start paying close attention to how their name is marketed and used. They can not keep playing the "we did not approve it" card when it is produced by one of their own partners and reap the benefit of free exposure.


See the controversial Hanes ad and Miley VF shoot below: