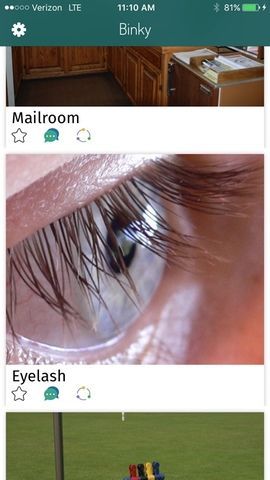 Ellen Smith — June 12, 2017 — Pop Culture
References: thenextweb & gizmodo
Share on Facebook Share on Twitter Share on LinkedIn Share on Pinterest
The compulsive and mindless nature at which people scroll through their social media feeds acted as the driving force behind the creation of 'Binky,' a disconnected social media app made to act as a pacifier for people who can't stop looking at their phones. This app is intended to reflect the "banality of our mobile screens" through providing a service that gives you something to do, while accomplishing nothing.

The app consists of a news feed that is reminiscent of Instagram's image-based structure and lets users scroll through boring and pointless photos simply captioned "eye lash" or "Mailroom." Users can comment, 're-bink' or 'like' the images, however, based on the anti-social nature of the app, no one will ever see your profile or comments. The app essentially takes other people out of social media, providing a space where people can get their social media fix by mindlessly scrolling, while making no impact on their surroundings.
3.9
Score
Popularity
Activity
Freshness
Access Advisory Services