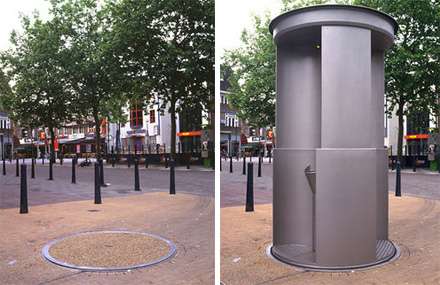 Urilift Appears at Night, Disappears in the Day

TechnoGadget — November 21, 2006 — World
References: johnchow
The government of British Columbia is looking at hydraulic, disappearing toilets for the roadways of Victoria. The toilets elevate at night and disappear during the day. The urinals are intended entirely for men, and more distinctively, for male drinkers. According to johnchow â€œThe Urilift system is a two-meter high stainless steel cylinder with three alcoves, each with a urinal, and no doors.â€ The city of Victoria will be the first city to try them out and then it will be spread to London and Belfast.
2.7
Score
Popularity
Activity
Freshness