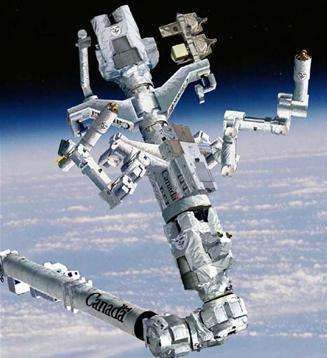 TechnoGadget — March 23, 2008 — Tech
References: gizmodo & coolest-gadgets
Share on Facebook Share on Twitter Share on LinkedIn Share on Pinterest
This scary looking robot from outer space is not one of the decepticons, its NASA's repair robot named Dextre. It is designed to repair the International Space Station as a replacement for an astronaut going out in space with its suit and oxygen. Dextre is about twelve feet long that can operate objects smaller than half a fraction of an inch using its eleven foot arms. According to astronaut Richard M. Linnehan, one of the astronauts who geared up Dextre in this operation, it's like "working with a Star Wars prop, but it isn't sci-fi, its reality, and it's happening up here right now." Astronauts can now focus themselves to experiments rather than fixing the ISS.
0.9
Score
Popularity
Activity
Freshness
Get Trend Hunter Dashboard