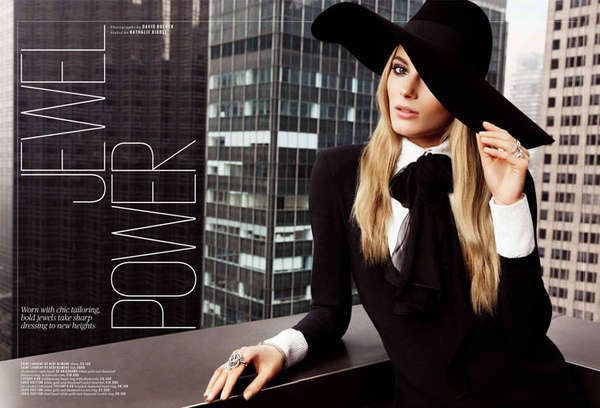 Meghan Young — June 7, 2013 — Fashion
References: standard & fashiongonerogue
Share on Facebook Share on Twitter Share on LinkedIn Share on Pinterest
The Deluxe 'Jewel Power' editorial may look slightly dark and serious, but there happens to be quite a lot of glitter going on, at least in the form of precious gems. A handful of sleek and contemporary monochromatic outfits have been accessories with luxurious jewels, hence the title of the photoshoot.

Appearing in the latest issue of The Evening Standard’s style supplement, the Deluxe 'Jewel Power' editorial was lensed by photographer David Roemer. It stars model Ieva Laguna. The Latvian beauty was captured against a sprawling cityscape backdrop wearing high-end labels from the likes of Valentino, Emporio Armani and Lanvin. Outfitted by stylist Nathalie Riddle, the true stars, however, were from jewelry brands including Sean Lane, Faberge and Tiffany & Co.