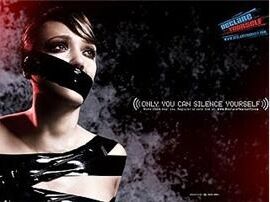 Jessica Alba for Declare Yourself

Sandra Winn — September 11, 2008 — Social Good
References: declareyourself & people
Share on Facebook Share on Twitter Share on LinkedIn Share on Pinterest
Down, boys, down—although Jessica Alba in bondage may send the hormones of red-blooded men (and women, in some cases) soaring, that was not the intention of Declare Yourself, a national nonpartisan, nonprofit campaign, that encourages young people to register to vote—and vote.

How does Jessica feel about the youth vote? According to People.com, Alba says, “I think it is important for young people to be aware of the need we have in this country to get them more active politically. People respond to things that are shocking.”

Jessica Alba in bondage, naked and wrapped with electrical tape (internet buzz likens the ad to scenes from the horror flicks “Hostel” or “Saw"), for Declare Yourself isn’t the first shocking tactic the campaign has used to capture the youth vote.  Other celebrity endorsements have included Christina Aguilera, her lips threaded shut with leather; Jonathan Bennett, his lips shut with three screws; Andre, gagged by a yellow polka dot bow; and LaToya with a nail through her lips—all with tears streaming down their face.

Declare Yourself has also featured unknowns with their lips closed together using staples, fishhooks, and silenced with a ball gag.

The motto for Declare Yourself is, “Only you can silence yourself.  Make them hear you. Register to vote now.”
2.7
Score
Popularity
Activity
Freshness
View Innovation Webinars

34 Incredible Jessica Alba Features
Throwing a Tantrum or Not, This Celeb is Hot