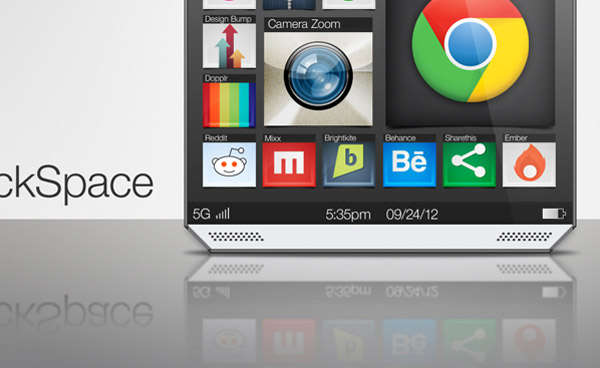 The DeckSpace Smartphone Proposes a New Way to Organize Your Apps

Amelia Roblin — February 26, 2013 — Tech
References: aaronkettl & yankodesign
Share on Facebook Share on Twitter Share on LinkedIn Share on Pinterest
Android and iPhone users have gotten used to the familiar layout of the uniform home screen, speckled with app icons of consistent sizes within a fixed grid. The DeckSpace Smartphone would do things a bit differently, arranging the virtual buttons according to category and frequency of use.

Aaron Kettl's mobile phone would have a Google operating system. The concept maintains the flat, slim and sleek physical features of the most sought-after smartphones on the market, but it offers its user a much more generous touchscreen, thanks to its broader length and width.

A great deal more clickable images can be clustered on the DeckSpace Smartphone display, assuming squared shapes in one of three sizes. The Play Store and Internet browser are the most predominant while Maps, email and messaging have been made to a medium scale.
2.9
Score
Popularity
Activity
Freshness
Access Advisory Services