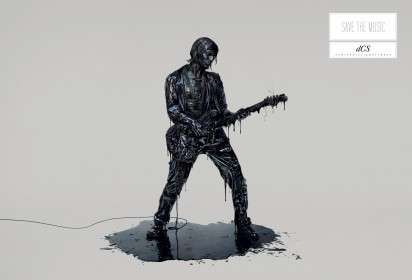 The DCS Audiophile Equipment Campaign Urges People to 'Save the Music'

Meghan Young — June 7, 2012 — Tech
References: leoburnett & ibelieveinadv
Share on Facebook Share on Twitter Share on LinkedIn Share on Pinterest
The DCS Audiophile Equipment campaign is disturbingly inky. As though dripping in tar, or something very similar, these musical icons look to be melting away in the wake of pirating technology and other modern developments that threaten their very existence. As stated in the succinct tag line, "Save the music," the ad campaign appeals to music lovers around the world to not only do the right thing, but also invest in some decent audio equipment to better enjoy the sounds they love so much.

Conceived and executed by the ad agency Leo Burnett based in Paris, France, the DCS Audiophile Equipment campaign was art directed by Laëtitia Chrétien with creative direction by Xavier Beauregard. Photographed by Vincent Dixon and post-produced by Kilato, the campaign is simple and creative.
4.2
Score
Popularity
Activity
Freshness
View Innovation Webinars