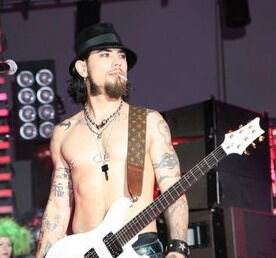 Dave Navarro Asked to "Take It Off"

Elsa Blaine — June 23, 2008 — Luxury
References: 6767 & luxist
Share on Facebook Share on Twitter Share on LinkedIn Share on Pinterest
Even though rocker Dave Navarro is on vacation he felt compelled to share his latest news with his fans this week. Writing on his blog '6767', Dave claims he has received a letter from French design house Louis Vuitton cautioning him to remove the 'faux LV guitar straps' that he has be touring with for the past 8 years, or they will take legal action and have Navarro sued. LV alleges in their letter, â€œthis copying has been wilful and is intended to trade upon the fame and cachet of the LV Trademarks to elevate the status of the infringing Guitar Strap, and of Jane's Addiction,â€ to which Navarro jokes,â€ Has anybody EVER purchased a concert ticket or an album based on what is hanging around the guitar player's neck? Ever?â€

Navarro, a confessed fan of Louis Vuitton products writes, â€œI have enjoyed the LV brand for years and years. I own many items such as luggage, belts, wallets, boots and clothing that bear the LV name. Hell, my gym bag is even a LV bag.â€ Dave found the letter off-putting and said, â€œI guess if they just called me up and said, "Hey, could you not use those straps anymore for the following reasons... etc.?" it wouldn't be such a ridiculous deal but the whole "Exhibit A" thing combined with their legal tone was just ludicrous enough to make me post the document here!â€ Navarro added,â€Tom Ford... Any interest in making guitar straps?â€

Navarro, who played guitar in the past with the Red Hot Chile Peppers and Jane's Addiction, has been with his band, 'The Panic Channel' since 2006.