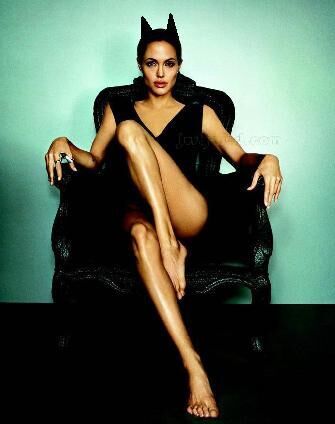 The idea of Angelina Jolie as Catwoman in a Dark Knight sequel actually comes from Julie Newar, the original Catwoman who starred in the first Batman TV series alongside Adam West.

"Angelina would own the part," Newmar, now 74, said, adding that friends in the industry said Angelina had made inquiries into the role.

Technically, Angelina could throw on the original catsuit -- she looks slim enough for its 22" waist. Not going to happen though. Although Newmar says the outfit still fits her (wow!), she donated it to Smithsonian's National Museum of American History.

Newmar is excited about the revival of the role though in a The Dark Knight sequel.

"I can understand how it would pique her interest. Catwoman is Batman's one true love," Newmar added. "She's tremendously popular with women because she's both a heroine and a villainess."

Newmar was the first Catwoman back in 1966. Since then, the Catwoman role has been reprised by Eartha Kitt and Lee Meriwether on TV. In movies, Michelle Pfeiffer took on the role in 1992 and Halle Berry in the 2004 movie, "Catwoman."

"When you look at the staggering box office of this current film, which actress wouldn't want to jump in?"

No kidding. Check out some of the hype The Dark Knight caused below.