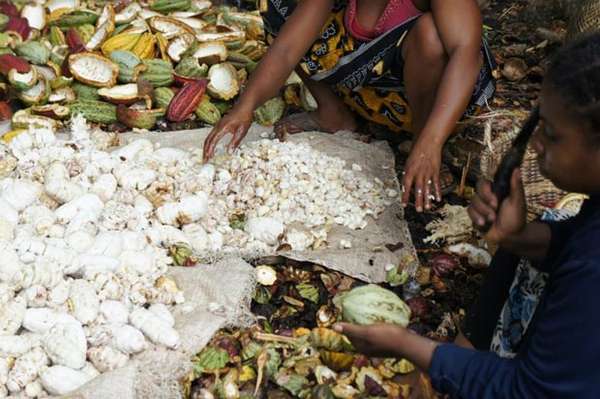 Jordy E — March 29, 2012 — Social Good
References: dandelionchocolate & coolhunting
Share on Facebook Share on Twitter Share on LinkedIn Share on Pinterest
The Dandelion Chocolate Bars brand was founded by San Francisco natives Cameron Ring and Todd Masonis. Now a well-known name in the Bay Area, the duo began their enterprise in their garage, moving up slowly within the region’s underground markets. Capitalizing on a growing bean-to-bar consumer niche, the phenomenal dessert product is known for its strict recipe of 70% bean and 30% sugar, effectively excluding any additives.

The bean-only emphasis of the Dandelion Chocolate Bars also involves a sound fair trade initiative. As supporters of just human employment practices, Ring and Masonis have been known to visit the regions in which their beans are produced, a decision that brought about their travels to the fields of Madagascar, Venezuela and Columbia. Their farmer-oriented focus is based on their will to engender equitable labor practices, as well as to their commitment to the elimination of the middle man.

The humane interchanges between Ring and Masonis and their foreign employees have created a positive working environment, and have moreover set a benevolent example within their industry. The impact of their compassionate business operations upon the cacoa bean production sector will remain to be seen.