The Stadiums of the Future 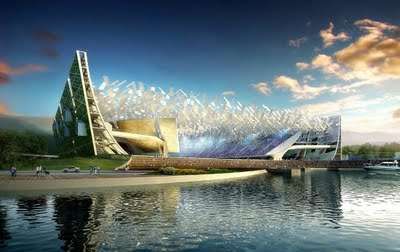 The proposed environmentally sustainable structure seeks to dramatically improve the fan experience as well as coexist with the surrounding, natural habitat. Power is generated on site from integrated wind turbines and solar panels built into the walls and roof. Water will be collected and recycled for irrigation, toilet flushing, air conditioning and fire suppression. Porous paving surrounding the stadium will allow for the reuse of storm water and much of NBBJ’s proposed Dalian Shide Stadium will be pre-fabricated in a temporary on-site factory.

The design for the stadium was envisioned as though someone pulled up two sides of the earth to form the exterior garden walls. The Dalian Shide Stadium walls will contain the structure for the roof, the entertainment suites, the toilets and concessions stands, the mechanical spaces, and the ticket booths. A concourse that circles the stadium will offer continuous 360 views of the field and large LED screen panels on the interior walls will broadcast the game.

The exterior of the structure is completely clad in living plants that change with the seasons, hence the name ‘Garden Stadium.' The Dalian Shide Stadium’s roof will be made up of lightweight fabric strung out on flexible cables that will protect fans from the elements, but still provide natural light.
4.1
Score
Popularity
Activity
Freshness
Get Better and Faster

Interactive Virtual Soccer
Sportpong Can be Played on Various Dimensions