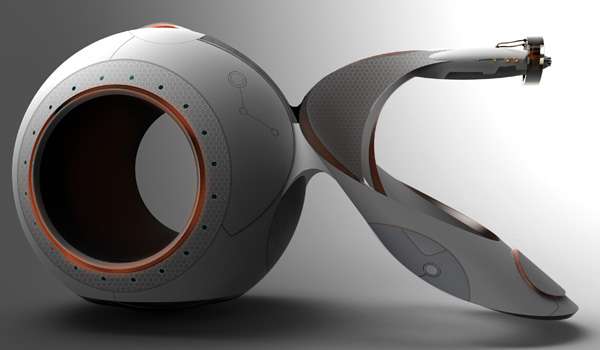 The Cyberman CYBERSNAIL Was Conceived for a Graphic Novel

Meghan Young — May 14, 2011 — Autos
References: wix & yankodesign
We have all seen some crazy concept car designs before, but I think that the Cyberman CYBERSNAIL vehicle has the be the first ones to be inspired by both snails and human brains. More than that, it was also designed specifically for the graphic novel 'Cyberman,' -- which has yet to be published -- instead of as a futuristic concept for eventual real-life use.

Designed by Omer Sagiv (who also happens to writing said graphic novel), the Cyberman CYBERSNAIL vehicle is essentially an allegory for firing neurons and hyper synaptic activity. With its magnet motor wheel and rocket engine stabilizer, it's heat core seems to have a synaptic connection with the rest of the vehicle to power it up for traveling. The Cyberman CYBERSNAIL definitely gets points in the creative department.
5.1
Score
Popularity
Activity
Freshness