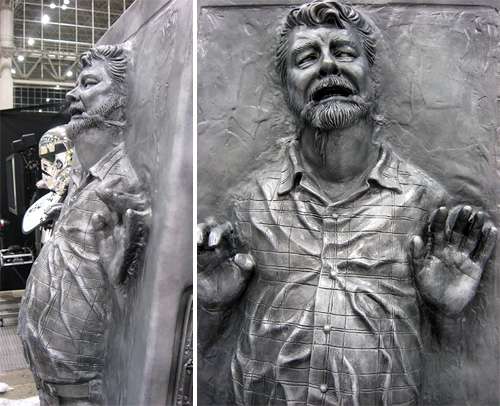 Once again I am foiled in my quest for articles by my inability to speak Japanese, so I am afraid I can't tell you much more. I do know it was premiered at an event to celebrate the Japanese 30th anniversary of Star Wars for which Lucas presented the first-ever Star Wars Celebration event in the Asia-Pacific.

Whilst George Lucas did not attend the convention himself - and of course didn't have a chance to see himself in carbonite - he did send a video message. A grab from this is featured as a picture, so you can judge for yourself how close to the real thing the model is.

Of course, the George Lucas sculpture is one of the many features which use Star Wars as the inspiration or creative trigger. For example, the flickr set to which these images belong also features the Vader project which, of course, was an article I featured yonks ago.