When Ads Cross The Line 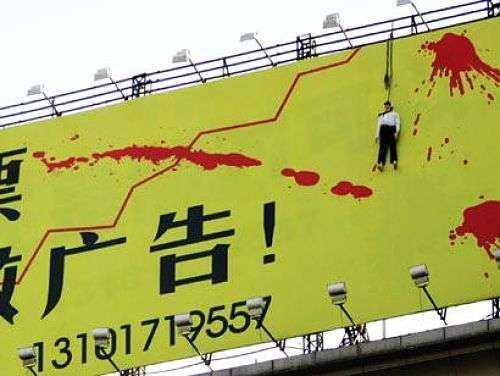 Ayman — November 1, 2008 — Unique
References: ananova
Share on Facebook Share on Twitter Share on LinkedIn Share on Pinterest
The current depressing financial situation with oil prices and the federal reserve is proving to be a source of inspiration in advertising. A billboard on top of the Yinji Shopping Mall in Zhengzhou, China has caused a huge controversy for tastelessly capitalizing on the global economical and financial crisis.

The billboard ad features a hanging mannequin that looks like someone has committed suicide. It reads, “It’s better to invest money here than put it into the stock market.”

The ad’s creative director has no problem explaining the decision to use shock imagery.

“We are making fun of the depressing stock market here. And the place the mannequin is hanging is right next to the stock index line,” Jiang Chengpu said.

However, not everyone took it as a cheeky, artistic expression. In fact, residents close by thought it was a real suicide and reported the situation to the local industry and trade bureau. There were complains that young children were terrified by the billboard, which led to the mannequin being taken down.
5
Score
Popularity
Activity
Freshness
Jeremy Gutsche Keynote Speaker