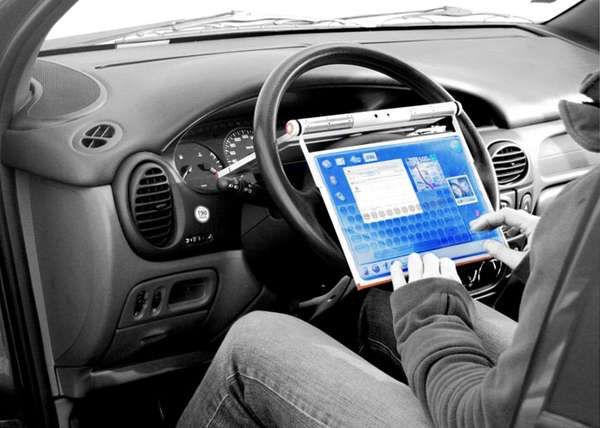 Dee Sandin — April 1, 2008 — Tech
References: computerworld & computerworld
Share on Facebook Share on Twitter Share on LinkedIn Share on Pinterest
Compenion, Canova, Siafu, Cario. These are a few names of laptops we'll be whining for in 2015. The Compenion concept notebook from Felix Schmidberger in Stuttgart, Germany, has designed a laptop that you just slide up to open. The pair of organic LED panels slide into place next to each other, and the lower panel is the keyboard/scribble pad and the whole thing measures only three-quarters of an inch.

The Canova, notebook or ebook, from V12 Design, is so cool. Using a display and a mechanical keyboard, it has two touch-sensitive displays with the upper screen used for viewing applications, and the lower screen for typing, drawing and jotting notes. But the Canova also lies flat for a larger expanse of working space.

Who needs a screen at all? Designer Jonathan Lucas' eccentric Siafu concept is for the blind and has no screen. Siafu converts images into 3-D shapes created with Magneclay, an oil-based synthetic material that forms shapes in response to electrical fields. You interact with your fingers to feel the bumps and protrusions that pop up, for reading a Braille newspaper, feeling the shape of someone's face or going over a tactile representation of a blueprint. "The idea was to open a new realm of digital interface for the visually impaired by enhancing and even surpassing existing technologies that currently cater to this group," said Lucas.

Imagine a device that is at home in a car, cafÃ© or hotel desk, and you have Anna Lopez' Cario. Work at your desk or on the move, the Cario is function and fashion. The traditional lid hinge is replaced with a shiny bar that is a carrying handle. It allows the lid to fold up for travel and can be set up like an easel and can also sit on a car's steering wheel. Best of all, when it's locked into the steering wheel, Cario has a microprojector that can show maps, videoconferences and find the closest gas station on the windshield. I want this one! Check out the article for way more info than I can provide here.