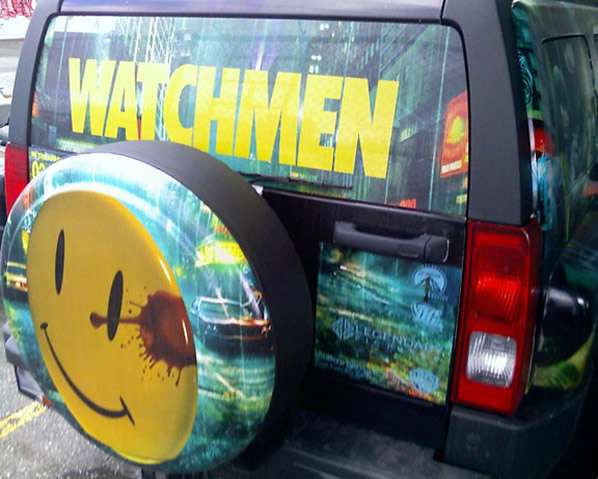 'Watchmen' Publicity in Full Force Around the World

Vincent Salera — March 3, 2009 — Pop Culture
References: watchmencomicmovie
Share on Facebook Share on Twitter Share on LinkedIn Share on Pinterest
If you’re a graphic novel fan, you already know about the much anticipated Watchmen movie coming out March 6, 2009. The marketing budget for this film is huge; downtown Montreal has ads all over the subway system, and L.A. and New York have everything from Watchmen Billboards to wrapped cars.

If you have no idea what Watchmen is all about, here’s a quick bio: Watchmen is a twelve issue DC comic book limited series created by writer Alan Moore, artist Dave Gibbons, and colorist John Higgins. Published in single issues during 1986 and 1987, you may now buy all twelve issues collected in one hard or soft cover graphic novel.

Watchmen has been the subject of several essays and serious literary discussions. It was named one of the 100 greatest novels of the past century by Time Magazine. More than twenty years after its release, there is still no greater comic book within the comic book fan community.

Like the X Men movie franchise, I believe that the Watchmen movie will appeal to fans and non-fans alike. Due to the complex storyline, I recommend you read the graphic novel before watching the movie if possible.
1.6
Score
Popularity
Activity
Freshness
Jeremy Gutsche Keynote Speaker