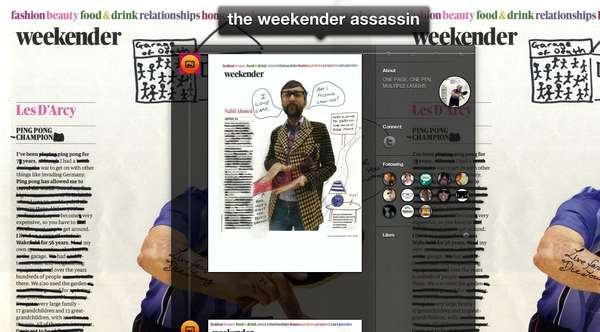 Blog The Weekender Assassin Finds Humor in the Mundane

Each week, a member of the public is interviewed and photographed for The Weekender, a full-page interview found in the Guardian Weekend magazine. It's a fairly straightforward interview that gives insight into people's lives and the different things they get up to on a Saturday and Sunday.

The founders of The Weekender Assassin take these interviews and edit them. Using the motto, ‘one page, one pen, multiple laughs,’ the blog provides just that. Often rude but always funny, the interview is edited with words deleted to make an entirely new comedy interview. Accompanying each comedy interview are a set of drawings and illustrations which look like the work of a 5 year old. This however only adds to The Weekender Assassin’s qualities.

Minimalist Comedian Tributes
'Is This Thing On? 2' Honors the Late Mitch Hedburg