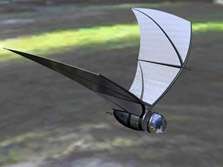 IdeaMan — March 20, 2008 — Tech
References: ns.umich.edu
Share on Facebook Share on Twitter Share on LinkedIn Share on Pinterest
There are a number of nicknames that could be used to describe the new spy bot being developed by the US Army, but I can guarantee most of them would be easier to use than to call it by its technical description: a robogargothopter! I think it means "robot bat-like flapping wing thing" (or something like that). Sensors, microelectronics, and batteries for the "spy bat" will be developed at the University of Michigan at the new Center for Objective Microelectronics and Biomimetic Advanced Technology, hence the acronym "COM-BAT".

One of the concepts calls for night time intelligence gathering capabilities, allowing the aircraft to hang out in trees, buildings or on power poles, then swoop out like a real bat over enemy territory, and send video, audio, or other sensor measurements (such as radiation or gas detector data) back to friendly troops in real-time.

According to the University of Michigan press release, "These are all concepts, and many of them are the next generation of devices we have already developed. We're trying to push the edge of our technologies to achieve functionality that was not possible before," said Kamal Sarabandi, the COM-BAT director and a professor in the U-M Department of Electrical Engineering and Computer Science.