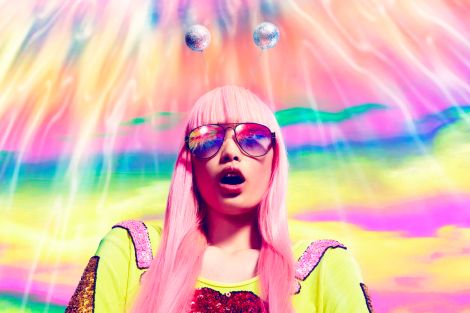 Laura McQuarrie — January 13, 2014 — Marketing
References: sheriffandcherry & wearintheworldnia.blogspot
Share on Facebook Share on Twitter Share on LinkedIn Share on Pinterest
'Color Bomb' is the aptly-named title for Sheriff and Cherry’s Pre-Summer 2014 campaign. In the images shot by Justin Ridler and Mark Vassallo, Fernada sports a vibrant pink wig, a silvery headpiece that looks like an insect’s feelers and models three eyewear styles, including the G1 Jungle Avio, G11 Doublestar and the G1 Jungle Disco.

For the campaign, Fernanda wears clothing that is equally as bold and bright, with some parts of her clothes that are sequinned or iridescent, to maximize color and light. In addition to this overload of color, the three photos are set with psychedelically-recolored skies, which are also reflected in the lenses of the stylish sunglasses. The trippy lookbook will have you dreaming of summer and days bright enough for wearing sunglasses.
5.7
Score
Popularity
Activity
Freshness
View Innovation Webinars