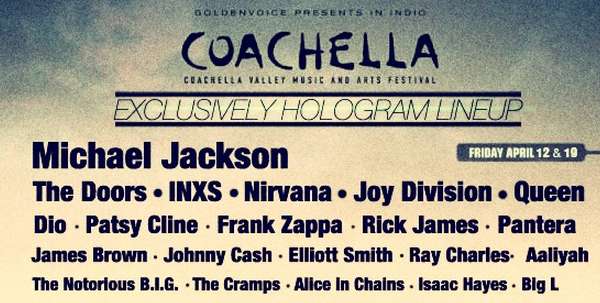 Harris Jay Rosenberg Alterman — April 20, 2012 — Pop Culture
References: coachella & aux
Share on Facebook Share on Twitter Share on LinkedIn Share on Pinterest
The Coachella 2013 Lineup has been released, and the names on the list will chill you to the bone. All of the musicians playing at the music festival are deceased, so in their place will be realistic holograms. Of course, this is a fake lineup crafted by a fan, but perhaps it will inspire Coachella to do a full hologram convert. With the recent viral attention to the Tupac hologram that performed at Coachella 2012, this future lineup is spreading across the web like wildfire.

Some of the names mentioned in the lineup include Michael Jackson, Johnny Cash, Jimi Hendrix, Mozart, The Notorious B.I.G, Ray Charles, Led Zeppelin, Bob Marley, James Brown, Nirvana, Buddy Holly and the greatest musician of all time, Jesus Christ. Never before in the history of man has there been a concert that features all holograms. If this concert were real, it would sell out as soon as tickets went on sale because it would truly be a once-in-a-lifetime experience to see these musicians perform.