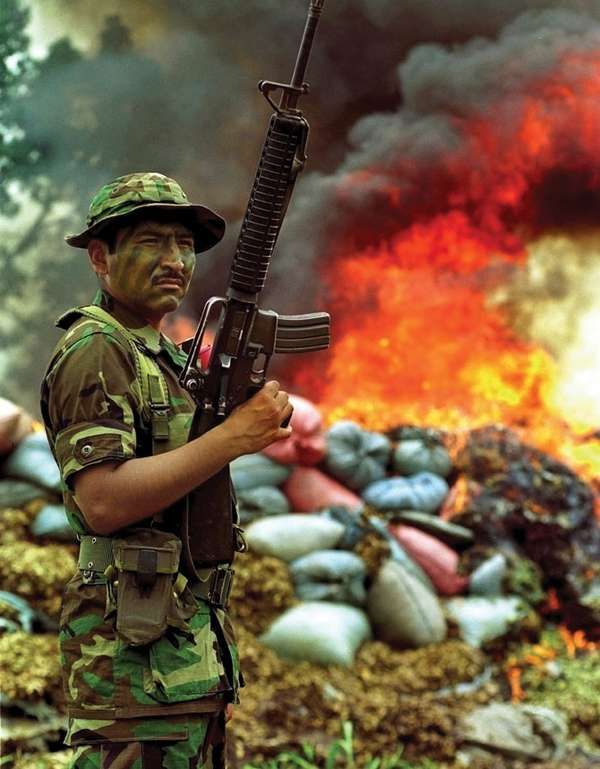 This Christian Lombardi Vice shoot is exciting, dangerous and frightening. Lombardi spent four years embedded with the (then) CIA-funded Mobile Police Unit for Rural Areas (UMOPAR), following them on their missions as they sought to capture and destroy drugs hidden in the swamps and forests of Bolivia.

My favorite image in the Christian Lombardi Vice collection is sixth one. It shows two men dressed in fatigues examining a large ball wrapped in yellow. Lombardi's caption for the picture reads, "As we were wrapping up, a UMOPAR soldier turned to me and said, 'You forgot your camera bag!' I replied, 'I didn’t bring a bag.' We opened it and found a one-kilo ball of cocaine sulfate. A drug mule must have abandoned it on the side of the road after realizing there was a checkpoint ahead."

It's not the flashiest picture in the collection, but it perfectly illustrates the hidden danger, cat and mouse game that Christian Lombardi and the UMOPAR lived with in those turbulent years.
4.6
Score
Popularity
Activity
Freshness
Get Trend Hunter Dashboard

Talking Nostril PSAs
TalkToFrank.com Shows the Dark Side of Cocaine Use