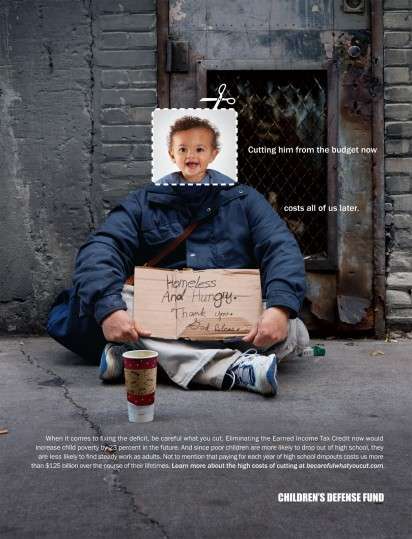 Meghan Young — August 21, 2012 — Life-Stages
References: fallon & ibelieveinadv
Share on Facebook Share on Twitter Share on LinkedIn Share on Pinterest
It might be disturbing, seeing pictures of innocent and happy babies superimposed onto the bodies of harden criminals, the homeless and more, but that is exactly the feeling the Children’s Defense Fund ad campaign is trying to evoke. They want people to feel uncomfortable about possibly having a hand in the way a child turns out because they made the wrong cuts when it came to fixing the national deficit.

Conceived and executed by Fallon, an ad agency based in Minneapolis, United States, the Children’s Defense Fund ad campaign reads, "Cutting her [or him] from the budget now costs all of us later.” A powerful series of ads, it cautions people in power to rethink what they feel is beneficial now, because it might not be beneficial later.
3.3
Score
Popularity
Activity
Freshness
View Innovation Webinars