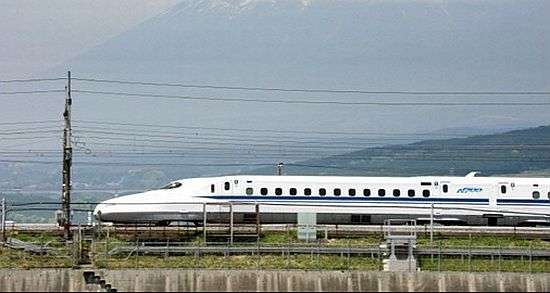 The train, which will run between Tokyo and the center of Japan, will have to exceed the current record of 310 miles per hour.

The new maglev train will cost $44.7 billion dollars, and the stock is already taking a hammering on the heels of the announcement.

"The company's board approved the plan this week and estimated that it would leave the company with a five trillion debt when the train goes into service in the financial year to March 2026.

The firm projects the train will bring in five percent additional revenue in the first year, shrinking JR Central's debt to the current level within eight years of operation, a statement said. JR Central initially had waited on the plan in hopes of government subsidies. The reason why the plan has not moved even a bit is because the government isn't able to bankroll it,â€ JR Central president Masayuki Matsumoto said, as quoted by the Nikkei business daily."

19 Techtastic Trains
From Bottoms Up Transit to Turbocharged Monorails