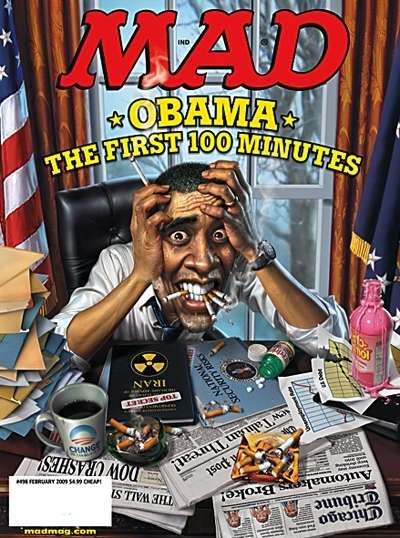 Drawing Obama Without Offending Or Being Boring Proves Tough

Bianca — January 28, 2009 — Social Good
References: huffingtonpost & politico
Share on Facebook Share on Twitter Share on LinkedIn Share on Pinterest
Cartoons of Obama have been springing up in media all around the world, some spunky caricatures, others offensive mockeries. Illustration has always been a huge part of news and entertainment media, but it becomes particularly crucial when it comes to politics—the way a certain person is displayed speaks world’s of the publication’s political stance. Usually, political cartoons emphasize a person’s flaws, but with Obama, some cartoonists are finding it challenging to criticize.

“I don’t know that I’ve ever had this experience before, of a president I maybe like,” said Pulitzer Prize winning cartoonist Pat Oliphant. “This is an antagonistic art. We’re supposed to concentrate on finding things wrong. There’s no point in drawing a cartoon that’s favorable,” he says of the Obama challenge.

The gallery includes a sampling of cartoons of Obama, most of which display him as lanky, big eared, and baring a huge grin… for the most part. MAD magazine’s dramatic pieces are an exception!