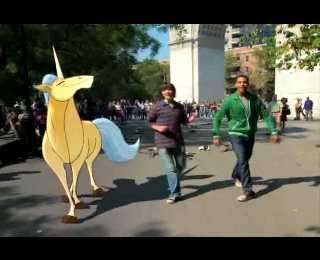 Bianca — January 29, 2008 — Unique
References: adrants
Share on Facebook Share on Twitter Share on LinkedIn Share on Pinterest
Don't be fooled -- this is no Lucky Charms commercial. If you're familiar with the Truth campaigns against cigarettes, then you know the ads tend to be rather gorey. The latest ad, however, goes against spreading awareness with a new approach that's actually even a bit... cute.

"A Magical Amount" created by Arnold and Crispin Porter + Bogusky includes animated, singing unicorns, bullhorns and leprechauns. They start on in the real world in a rally against smoking. "Too much nicotine can make you sick," one person says. That's when the unicorn chimes in, "That's why they need the magical amount!" They talk about cigarette agencies adding the "magical amount" of nicotine to cigarettes to keep you from feeling sick, but still addicted.