Blogging on the High Seas with Carnival

10 Examples of Solid Serum Skincare
Next
Set of
Related
Ideas 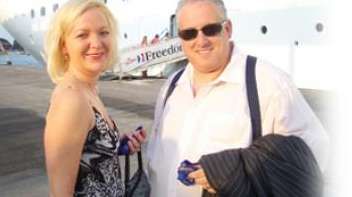 Carnival has embraced blogs for a while, their Carnival Freedom Cruise Director, John Heald, has kept a regular blog for a while now, so when the cruise line announced the "John Heald's Bloggers Cruise," it wasn't a big surprise to those in the know, but was undeniably exciting to all.

Getting internet connections on the high seas has always been a problem. In fact, I opted out of a family vacation this year because I couldn't bare the thought of separation from Trend Hunter. Clearly Carnival has found a way to offer fast, reliable connections... something to keep in mind for next time!

The Carnival Freedom ship is setting sail for the Western Caribbean this week with John along with a devoted set of about 700 readers. His humorously honest blog not only talks about life on the cruise ship from his perspective, but for that of the crew and passengers. He extends beyond that though, and talks about personal infatuations with celebrities like Catherine Zeta-Jones and Angelina Jolie and personal addiction to jelly beans. It wasn't long before readers started to contribute their own thoughts, and so Heald suggested the idea of a cruise in which all could meet.

In Saturday's entry, the first from his cruise, Heald wrote:

"So, good morning everyone from the Carnival Freedom as we head to Cozumel. The weather though looks to be a bit grey and overcast and little white horses are strutting their stuff atop of the waves .............. ahhhhhhhhhh. I hope the weather gets better, I know so many people have come from cold and miserable weather hoping for some Caribbean sun..........fingers crossed then.

"So, what happened yesterday? Well the fun started during embarkation and as I went down to the lobby bar about 2 pm for a coffee I was attacked by a hoard of screaming fans who were kissing me, hugging me, ripping at my clothes and trying to drag me back to their cabin ..............and that's just Big Ed!"

For those feeling bummed they missed on this cruise experience, Carnival has already announced a repeat Bloggers Cruise in February 2009. It will be on the Carnival Fantasy and leave out of New Orleans.
1.7
Score
Popularity
Activity
Freshness
Attend Future Festival Virtual