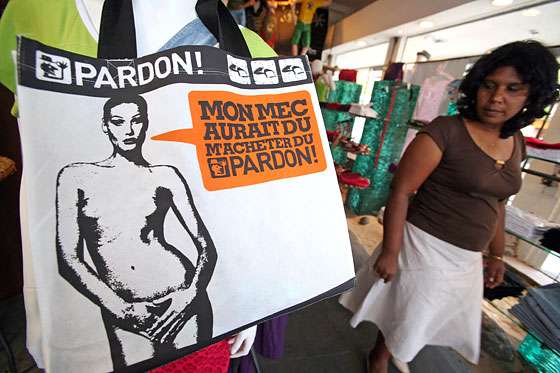 Ayman — December 16, 2008 — Naughty
References: telegraph & nymag
Share on Facebook Share on Twitter Share on LinkedIn Share on Pinterest
Remember that nude Carla Bruni-Sarkozy picture that was auctioned at Christie’s for $91,000 back in April 2008? Well, Carla was not happy about it then, but she is particularly unhappy with a store using that same image on shopping bags that everyone will be carrying around in the streets. Who could blame her, now that she’s the First Lady of France?

Carla is suing clothing maker Pardon for using that naked image, which dates to 1993, on 10,000 shopping bags without her blessings. The bag comes with a talk bubble that reads, “My guy should have bought Pardon!”

“Carla Bruni-Sarkozy has exclusive and absolute rights over her image,” explained Thierry Herzog, Carla’s lawyer. He added that the photo was used “without her consent and to promotional and commercial ends.”

So what are they planning to do? Herzog stated, “We are going to ask for 125,000 euros in damages for the sale of this article which constitutes a moral and matrimonial attack.”
4.1
Score
Popularity
Activity
Freshness
View Innovation Webinars