22 Man of Steel Sensations
Next
Set of
Related
Ideas 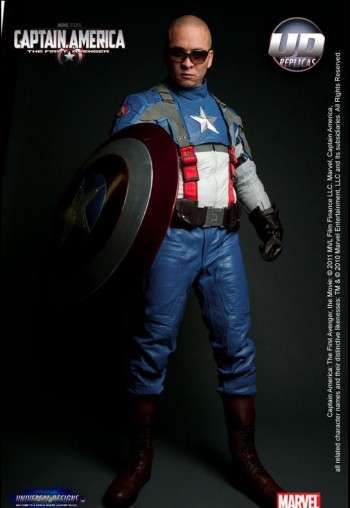 Katherinev123 — February 10, 2012 — Fashion
References: udreplicas & chipchick
Share on Facebook Share on Twitter Share on LinkedIn Share on Pinterest
The Captain America Motorcycle Suit from UD Replicas could either be an awesome early Halloween costume (so you can sit pretty until October) or a cool outfit to wear -- alone, of course -- to pretend as if you're one of the Avengers.

An officially licensed replica of the one worn in the movie 'Captain America: The First Avenger,' the Captain America Motorcycle Suit offers every feature as seen in the film, claims UD Replicas. The suit is made of molded leather ("quality tanned cow hides") and features aluminum accents and emblems, as well as the iconic silver star on Captain America's chest. According to the website, the suit also comes with gloves, boots, a functional belt and removable body armor in the forearms, shoulders and back. Unfortunately, the suit doesn't come with the shield and the helmet shown in the images.
2.6
Score
Popularity
Activity
Freshness
Get Trend Hunter Dashboard