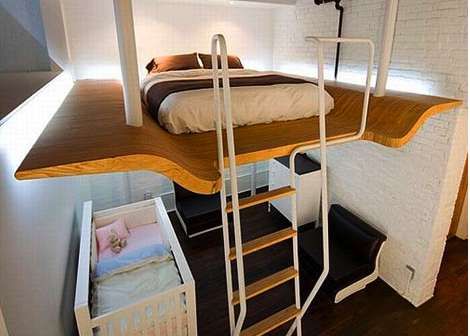 Amelia Roblin — July 12, 2011 — Art & Design
References: ateliersmc & dornob
Share on Facebook Share on Twitter Share on LinkedIn Share on Pinterest
Most people think of bunk beds as as efficient sleepers in children's rooms, on trains or in military accommodation, but the space-saving solution has a place in compact urban lofts. This cantilevered bedroom by Ateliers MC can be found in an old converted warehouse in Montreal, Canada, commissioned by a couple that wished to make the most of their shrinking apartment.

With a brand new baby and all of the accessories to accompany it, space became tight in the one-room studio. The architectural firm's remedy was to create a sort of mezzanine, still open to the entire flat, but raise one particular section to free up more floor. The cantilevered bedroom by Ateliers MC comprises a suspended platform sculpted from a beautiful sunken wood plane. A double bed is nested snugly within this space below the ceiling, accessible by a ladder next to the infant's crib.
6.6
Score
Popularity
Activity
Freshness
Get Trend Hunter Dashboard