Top 30 Market Trends in May 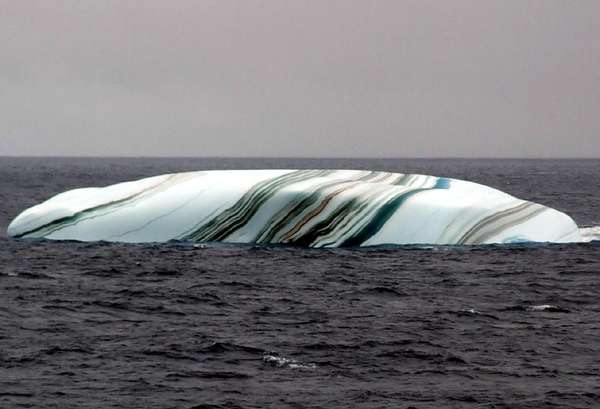 Pearl — July 16, 2008 — Eco
References: dailymail & snopes
These pictures you may have received in your email box are actually true! A Norwegian sailor Oyvind Tangen took some remarkable pictures of unusual icebergs when he was on board a research ship between Cape Town South Africa and the coast of Antarctic.

Of the first one he encountered he said, â€œIt reminds me of striped candy I bought as a child.â€ Other icebergs he saw included one with a prominent blue stripe and one which appeared marbled.

Fallen snow collects and compresses to form the ice sheet which covers the Antarctic. Icebergs form when they break off and drift into the sea. They usually look white because of the trapped air bubbles. The stripes from when part of the iceberg thaws and refreezes so quickly that air bubbles are excluded, resulting in a blue colour. Green stripes are formed when the iceberg falls into an algal rich of the sea - a layer of salty seawater freezes to the underside. Blue striped icebergs are quite common in these waters unlike the brown ones. The brown, black and yellow stripes is sediment gathered from underneath the ice sheet.

The Australian Antarctic Division has beautiful pictures of icebergs including striped ones.
4.4
Score
Popularity
Activity
Freshness