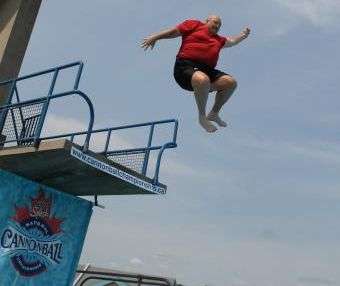 Bianca — August 16, 2007 — Lifestyle
References: news.therecord
Canada's newest sports competition looks like it could be a bomb... a water bomb that is. Brian Utley, 54 was the cannonball champ in the Trident Splash National Cannonball Championships in Toronto today. The high school teacher from Calgary made waves when he plunged his 350lb+ frame into the Ontario Pool, beating out nine other Canadian contestants.

The prize? A year's supply of Trident chewing gum and a cheque for $2,000. Should've been a Tim Horton's gift certificate. Contestants weren't just judged on the size of their splash, but also on the style (music choice, and yes, costume, were factors), flare (how they actually performed, from air to landing) and how well they conformed to cannonball form.

The other two finalists included Garfield Andrews, who channeled Michael Jackson's zombie from Thriller and Doug Bergmann who flounced around in a pink tutu. You betcha he danced before taking the plunge!

A graceful sport it is not, but it's certainly fun and showcases the laid back, ready-for-a-good-time attitude Canadians are known for. Who ever thought that eating donuts would be the best method to train for a sport? How Canadian, eh?