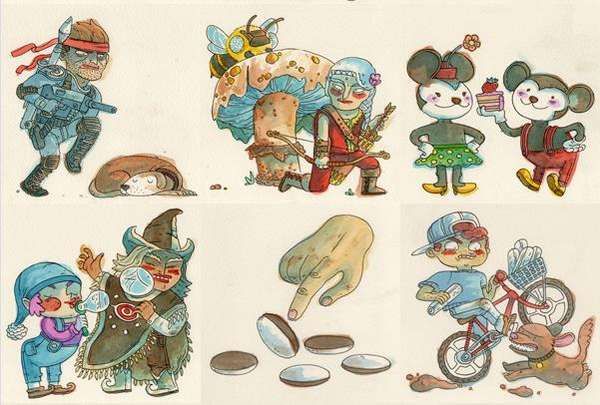 Jason Soy — August 24, 2011 — Tech
References: campbellwhyte & campbellwhyte
Share on Facebook Share on Twitter Share on LinkedIn Share on Pinterest
It takes quite a lot of dedication to archive anything, but Campbell Whyte has taken it upon himself to create a collection of Nintendo Entertainment System-inspired illustrations cataloging every NES game in existence. Yup, that's 799 games in total! Titling the project '8 Bit Dreams,' this incredibly large task is so time-consuming that Whyte expects to complete his entire NES retrospective sometime around April of 2013.

Sure, the task of drawing images for every NES game in existence is quite an astounding task, but what's even more impressive is Campbell Whyte's pictures themselves. Drawing in a style reminiscent of the Rugrats cartoons from the '90s, each illustration accurately depicts the gameplay of their respective video game title. Just look at Solid Snake sneaking past that dog!

Implications - As consumers continue to age, many of them are turning to nostalgia products in order to revisit passages of their youth. This, in turn, induces euphoria for these individuals. Corporations may consider releasing a line of products referential to specific decades as the demand for nostalgia products is at an all time high.
4.3
Score
Popularity
Activity
Freshness
Access Advisory Services