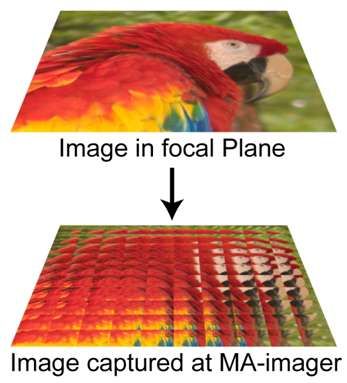 Ayman — February 21, 2008 — Unique
References: gizmodo
Share on Facebook Share on Twitter Share on LinkedIn Share on Pinterest
We usually think of photos as a two-dimensional representation of a scene. However, Stanford University researchers have developed an image sensor that adds a third dimension by judging the distance of subjects within a snapshot. The new technology is called 'multi-aperture image sensor,' and sees things differently than the light detectors used in ordinary digital cameras.

Unlike a normal camera sensor, the three megapixel chip uses overlapping 16x16 arrays of pixels. Each "sub-array" has its own lens. Since these arrays see from slightly different angles, 3D information can be obtained by examining the differences between the images, much as the human brain gleans depth information from comparing images from our two eyes.

In addition to extracting depth information, the design may reduce the color-crosstalk problems current sensors suffer from. It can also take macro close-ups in restricted spaces, making it potentially useful in medical situations.