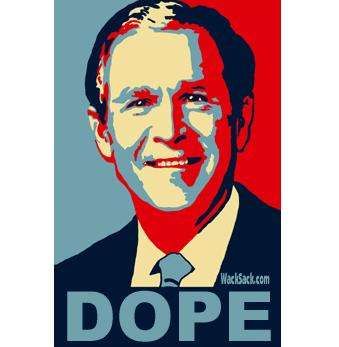 After the originals by Shepard Fairey sold out almost immediately, it wasn't long before the posters were spoofed. First it was Michael Ian Weinfeld's POPE parody in honor of Pope Benedict IV's US visit... and now, in honor of George W. Bush, it's DOPE.

The DOPE ads were created by WackSack.com who says, "Don't need a poster? We knew that. That's why we slapped the image on bags, t-shirts and magnets."