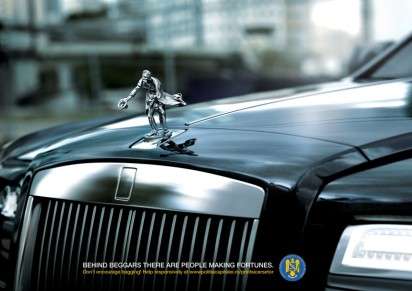 Meghan Young — April 11, 2012 — Marketing
References: publicis & ibelieveinadv
Share on Facebook Share on Twitter Share on LinkedIn Share on Pinterest
As much as people would like to help the less fortunate, giving into beggars is not the most effective solution as the Bucharest City Police campaign shows. Instead, it perpetuates the problem of passivity. By enabling beggars, people end up making them reliant on others instead of themselves. Plus, there are organizations and foundations in place to help groups of homeless rather than individual ones.

The Bucharest City Police campaign was conceived and executed by Publicis, an ad agency based in Bucharest, Romania. Art directed by Irina Stoleru with creative direction by Razvan Capanescu, the ad campaign portrays beggars as hood ornaments on cars. Paired with the statement, "Behind beggars there are people making fortunes," it shows that if there is a will, there is most certainly a way.
4.5
Score
Popularity
Activity
Freshness
Attend Future Festival