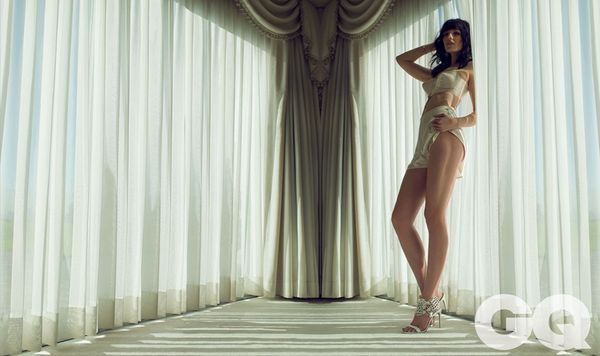 Meghan Young — February 5, 2014 — Fashion
References: gq-magazine & refinery29
Share on Facebook Share on Twitter Share on LinkedIn Share on Pinterest
The British GQ March 2014 editorial stars Canadian actress Jessica Pare, who is best known for her role on the hit AMC television show 'Mad Men' as Don Draper's third wife. Channeling her character in the photoshoot, she has a sexy appeal that borders on a retro '60s vibe. Yet there are modern touches as well from her stiletto shoes to her relaxed hairstyle.

Shot by photography duo Stevie and Mada, the British GQ March 2014 editorial takes place in a curtained room. The magazine writes teasingly on its website, "And now, as TV's sexiest series builds to its stylish conclusion, the beautiful Jessica Paré--yes, she of "Zou Bisou Bisou"--is preparing to stretch her legs." Of course, a person would have to pick up the issue to see how she'll be doing that.
4
Score
Popularity
Activity
Freshness
Attend Future Festival