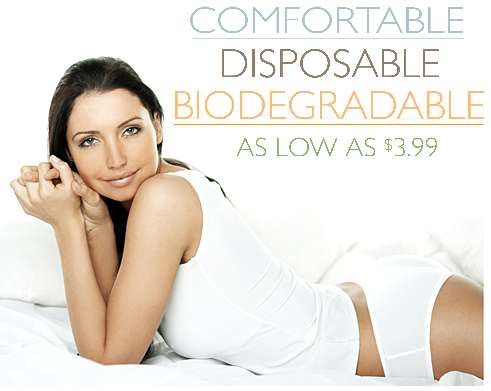 Briefly Biodegradable Undies Can Save the Day

Traver Dandridge — April 26, 2009 — Fashion
References: wearbriefly
Share on Facebook Share on Twitter Share on LinkedIn Share on Pinterest
Briefly cotton disposable underwear is perfect for travel, convenience, emergencies, hospitals, and hotels. Disposable underwear by Briefly sells for around $4.00 for a pack of three, and the products range from thongs and bikinis to men’s boxers. Briefly is also selling one pair of underwear for $1 to send to the Red Cross for relief efforts.

After natural disasters, neither the Red Cross nor FEMA provides underwear, and you certainly wouldn’t want to wear someone else’s used underwear. Briefly donates a pair of biodegradable underwear to disaster victims for every pack sold online.

Briefly disposable underwear was a blessing to the recent victims of the Sayre fires in California, as well as many other disaster victims.

Briefly began when my family was stuck in the Hurricane Katrina disaster. Our disposable underwear would have saved many victims from infectious diseases that were spread because of the widespread hygiene issues. Our Briefly disposable cotton underwear for men and women promotes good hygiene, and it’s a comfortable, convenient necessity for emergencies.
2.7
Score
Popularity
Activity
Freshness
View Innovation Webinars