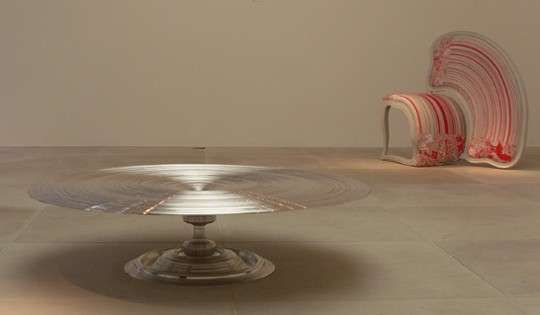 Artist Sebastian Brajkovic Freezes the Motion of Time in Furniture

Brajkovic’s low aluminum Lathe table seems to be thrown, like a ceramic pot, but it was computer designed and cut using a computer numerical controlled lathe. An exaggerated pedestal base profile retains circular whirls in the table top that make the table appear to be spinning, just as it did on the lathe bench during creation.

The Dutch designer’s Sinking Glass table is an interpretation of sunken objects in fog – half underwater and half exposed. The glass acts as a simile for level stilled water and has implications as a metaphor for global warming.

Though Sebastian Brajkovic’s Lathe V chair has been recently purchased by New York’s Museum of Arts and Design for their permanent collection, but the museum, like many others, is missing the innovation and beauty of Brajkovic’s tables.
1.9
Score
Popularity
Activity
Freshness
Access Advisory Services