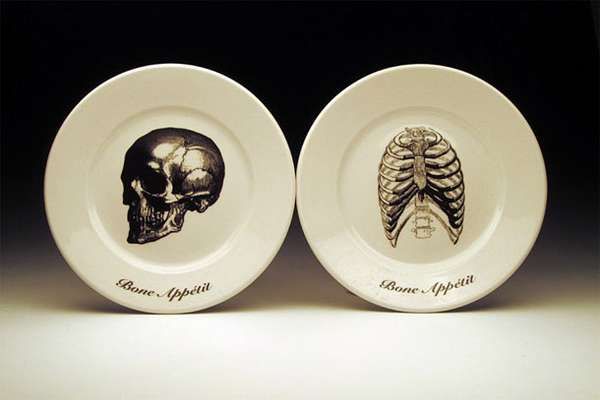 Amelia Roblin — October 15, 2011 — Unique
References: meredithhost & hypeyou
Share on Facebook Share on Twitter Share on LinkedIn Share on Pinterest
It isn't so much this way for Western culture anymore, but an awareness of death used to come as a side dish next to a serving of freshly hunted meat. While the Bone Appetite collection of crockery does not at least directly reference the remains of butchered animals, it literally pictures different parts of the human skeleton instead.

It may not be that the intention of the artist was to conjure up images of cannibalism, but perhaps it was. An alternative is that it might be a visual pun of the term "bone china." Quite as easily, the peculiar set of plates and bowls might simply have been ornamented with skulls, hands, pelvises and ribcages for no profound reason at all. Bone Appetite tableware by Meredith Host has an intriguing beauty about it, despite of and because of its detailed anatomical sketches.
2.2
Score
Popularity
Activity
Freshness
Get the 2023 Trend Report FREE