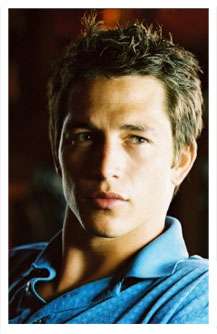 ‘The Final Destination’ is Bobby Campo’s first feature film and was shot entirely in 3D, giving audiences a completely different movie-watching experience with this high-action thriller.

1. How do you keep your work on the cutting edge?

I’m still learning! Everything is so new to me because I’ve only been doing this for 3 years so I haven’t exactly found a comfort zone and to me that makes it fresh. The fact of the matter is that I love to learn. That is probably why I started down this path because this profession scares me.

I think that as an actor there is always room for improvement and that proper training is an intricate part of that process. I remember hearing a story about how Leonardo DiCaprio went to a class that was taught by Marlin Brando! My first thought was if Leo is still studying than, I better damn well get back into class.

Music, I love listening to scores and soundtracks when I’m working (ie: Dark Knight, Assassination of Jessie James), and I like to throw some Nine Inch Nails in the mix. I like to just shut reality out and move into a world of imagination. Creativity can flow when distractions are removed... No cell phones on set and an iPod just about does the trick.

Oddly enough I had this thought when I was in the shower the other day, WWRDJD - “What Would Robert Downey Jr. Do?” I feel like this is the best answer for this question. Asking yourself WWRDJD in every situation is a surefire way to keeping it real.

4. How did you get involved in acting and what motivates you to continue?

I fell into this acting thing. Acting sort of picked me more than I picked it. My friend Lisa London practically dragged me to L.A. Don’t get me wrong, I absolutely love the art, but when I started I was petrified. Overcoming the challenge was a huge motivation to starting this career, but now I couldn’t imagine doing anything else.

When I first told my mom that I was going to drop out of college to become an actor, she said, “Finally! You’re not cut out for the regular world, you were born to be an actor,” which was weird to me considering how short of a time I had been doing it.

My motivation for continuing is to become Spiderman, not kidding. I want to play Peter Parker more than anything, plus I love movies so much and I have a few ideas that I think the world needs to see.

5. How significant are the topics of cool hunting and trend spotting in the world of entertainment?

Super important. One wouldn’t exist without the other. The entertainment community doesn’t necessarily define what’s cool and trendy, but it is a distributor of cool. Take Twitter, for example. Twitter had been around for maybe a year and a half before [Ashton] Kutcher got involved. Kutcher was the tipping point. Once he started tweeting, especially that little photo stunt, it blew up. Next thing you know, CNN is on there, now my mom is on there. Case and point @mamacampo - tweet her now!

Trends are what’s cool right now. If Stephen Christian is doing it, it’s trendy. If I’m doing it, then it used to be trendy. Stephen is my brother-in-law and damn that guy knows how to dress. He’s given me a ton of clothes, mainly because I think he feels bad for me. I’m a t-shirts and jeans kinda guy.

8. What is the coolest aspect about your upcoming movie [The Final Destination]?

Hands down, the 3D. I’d have to see this movie just for that. This is historical in a way! The F23’s are brand new, never been used before 3D cameras developed by James Cameron. I just can’t wait to see it in a huge theater! I can safely say, there will be no spectators in this movie, as an audience member you are in the thick of it right there with the characters on screen. You might pay for the whole seat, but all you’ll need is the edge!

9. Professionally, what do you want to be doing in 10 years?

Making my own movies! I want to make a trilogy.

10. If you weren’t in entertainment, what would your dream profession be?

Acting is rad because you can be all professions. I wouldn’t want to do anything else.

11. What are your favorite hobbies?

12. If you could work with anyone in the world, who would it be and what would you do?

I’d be acting or maybe eating craft services… they would have a big ass budget so you know the food would be amazing.

13. Who is your favorite actor/actress of the moment, and what makes them cool to you?

That’s a tough one. Johnny Depp is, and always has been, a favorite of mine. I was at Comic-Con this year and he was there. I wanted to talk to him, but didn’t get to, which was unfortunate. Robert Downey [Jr.] as well. Both of them are fantastic actors, but more importantly they seem to have a blast doing what they do. Their work is so interesting because they are leading men, but with something unique added into it. They’re rock stars really. One minute Johnny is Willy Wonka, the next, he’s Dillinger. I respect their versatility so much.


The Final Destination will be in theaters (in 3D) on August 28th. If you want to hear more from Bobby Campo, follow him on Tiwtter @bobbycampo.
3.5
Score
Popularity
Activity
Freshness
Attend Future Festival