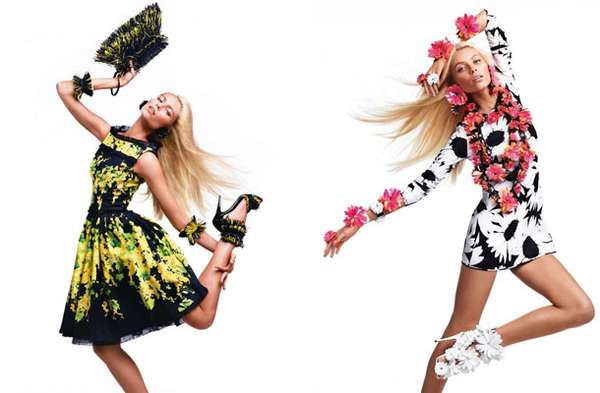 Meghan Young — January 29, 2012 — Fashion
References: blumarine & fashiongonerogue
The Blumarine Spring 2012 campaign touches on the ever-popular tropical theme, but instead of taking the well-trodden path towards lush jungle backdrops and sexy tribal patterns, this ad campaign is much more playful. The props and accessories used throughout the photo shoot all point towards the Tiki culture, right down to the ankles and wrists.

Shot by photographer Sebastian Faena, the Blumarine Spring 2012 campaign stars Vika Falileeva. Fashion Gone Rogue excellently describes her as "a cross between cheerleader and island babe." The straw-like accessories that initially give the outfits a Tiki aesthetic also double as modern day pom poms. Not to mention that her enthusiastic poses could either be regarded as a cheer or a tribal dance.